April 11, 2016 — Researchers have found signs of traumatic brain injury (TBI) on diffusion-tensor MR images (DTI-MRI) in nearly half of a small group of retired NFL players, according to a study scheduled for presentation next week at the American Academy of Neurology (AAN) annual meeting in Vancouver, British Columbia, Canada.

The preliminary findings from the largest study of its kind to date indicate that 17 of 40 former NFL players, or 43%, had signs of traumatic brain injury on DTI-MRI scans. The results suggest that longer careers place athletes at significantly higher risk of brain injury, and the information could shape the debate over football’s long-term impact on former athletes.

“I was not surprised that some [DTI results] would come back positive, but I did not think almost half would come back as positive,” study author Dr. Francis Conidi from Florida State University College of Medicine told AuntMinnie.com. “And 30% [of the results] came back as positive with conventional susceptibility-weighted and gradient echo [MR] imaging. That was shocking as well.”

Conidi and his colleagues at the Florida Center for Headache and Sports Neurology have been seeing retired athletes for several years now to evaluate them for memory loss, chronic headaches, and other neurological abnormalities. 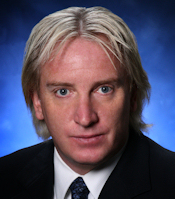 More specifically, DTI measures the integrity of white matter through the flow of water molecules in the brain.

“When white matter is damaged, the movement of water molecules in the brain will slow and fractional anisotropy values will decrease,” he explained. “That is a well-accepted biomarker for brain injury at this point. So it makes sense to use that technology to evaluate these players.”

In the prospective study, the researchers conducted thinking and memory tests along with the MRI brain scans in 40 retired NFL players, who had an average age of 36 years (range, 27-56 years).

The retirees had played an average of seven years (range, 2-17 years) in the NFL and reported an average of 8.1 concussions per player. Twelve players (31%) said they had several subconcussive hits, or hits considered to be below the threshold of a diagnosed concussion. The majority of subjects had been retired for fewer than five years.

All of the former players underwent a review of their neurological histories and exams, as well as extensive neuropsychological evaluation.

The players as a group had a mean Mini Mental State Examination (MMSE) score, which measures global cognition, of 27.3 (range, 16-30). An MMSE score of 24 or greater indicates normal cognition. The subjects also had a mean Clinical Dementia Rating (CDR) score of 0.5 (maximum score, 1). A score of 0 indicates an individual is normal, while a score of 3 indicates severe dementia.

Based on the review of the diffusion-tensor images, 17 players (43%) had levels of water molecule movement that were 2.5 standard deviations below that of healthy individuals of the same age.

In addition, 12 former players (30%) showed evidence of traumatic axonal injury, due to disruption of the nerve axons, on conventional susceptibility-weighted and gradient echo MRI. Axons are part of nerve cells and help transmit signals from one cell to another in the brain. 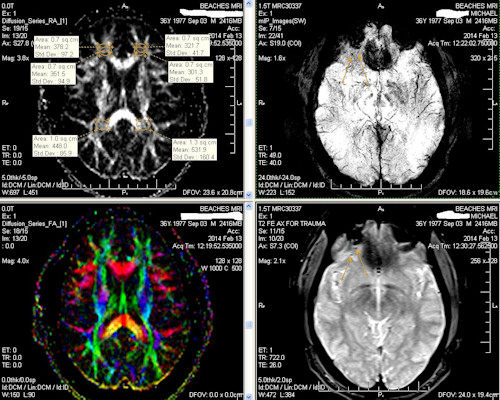 The retirees did not fare much better on neuropsychological tests, which showed significant abnormalities in attention and concentration (42% of former players), executive function (50%), learning and memory (45%), and spatial and perceptual function (24%).

Offensive and defensive linemen and running backs appeared to have more positive DTI results than former players of other positions.

“That points to the subconcussive hits — the little hits, not the big ones — that are causing the problem,” Conidi said. “That raises the issue of limiting lifetime exposure to contact, limiting [contact] in children, and even up to college and in practices, because that is when most of the banging takes place.”

Since the posting of the abstract for the AAN meeting, the researchers have increased the study cohort to approximately 80 players, and they plan to continue increasing the number of subjects going forward, Conidi said.

He also suggested that the NFL increase funding to investigate concussions in the sport and their potential long-term effects. Funding for this study came from the players’ health insurance.

Pueblo Radiology's mission — to provide the highest quality diagnostic imaging in a professional yet compassionate manner — with timely scheduling and results for our patients, referring physicians, and hospital affiliates.